It is a joy to listen to music while you are playing games on Xbox One. Thankfully, now Xbox One has cooperated with one of the largest music streaming apps——Amazon Music, which means you are able to enjoy millions of songs in the background when you play games on Xbox One. It is a pity that Amazon Music can only be played on Xbox One by people living in United State, excluding people in other regions. But you shouldn’t be bothered because in this article we have prepared several ways to play Amazon Music on Xbox One outside the US.

Part 1 Play Amazon Mic on Xbox One with App

Part 2 Play Amazon Music on Xbox One with Web Player

Considering that Xbox One has a built-in web browser, in this part I’ll show you how to go to Amazon Music’s web player to download and play music on Xbox One if you are not in the United States.

Part 3 Play Amazon Music on Xbox One with TunesMake

Except for streaming music apps, Xbox One also has other common media players, such as VLC, Simple Background Music Player, which enables you to play music from the USB flash drive on the Xbox One. But since the Amazon music is protected by DRM, you have to first convert them to other common formats and then transfer them to the USB flash drive.

To do that, you can try TunesMake Amazon Music Converter. It allows you to download Amazon Music songs and podcasts to MP3, FLAC, WAV, AAC, M4A, and M4B in batch without damaging the original audio quality. With it, you can download music from Amazon Music at up to 5× conversion speed and save Amazon Music to the local drive.

Below is an elaborated tutorial on how to download Amazon music for playing on Xbox One. Remember to download TunesMake from the above link before starting.

Look through the music library to find the Amazon Music playlist or album you want to download and convert. Click the target item and copy the link to the music, album, or playlist. Then paste the link into the search box on the converter and your selected music will be loaded into the conversion list.

Tap on the three-line icon on the upper right and choose Preference > Convert, where you can customize the format, channel, sample rate and bit rate. Click the OK button to save the changes.

Click the Convert tab. After the conversion is completed, you can click the “Converted” tab to find the downloaded songs on the local drive.

If you are a user of Amazon Music in the United States, then it is easy for you to listen to Amazon music on Xbox One. If you are in other regions, then I highly recommend using TunesMake Amazon Music Converter to download and convert songs from Amazon Music. You can follow the above-mentioned guide to give it a try. Leave a comment if you have further difficulties. 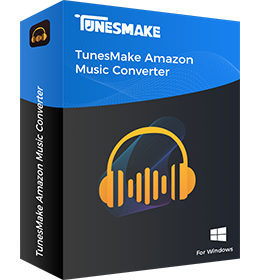 TunesMake uses cookies to ensure you get the best experience on our website. Learn more Got It!